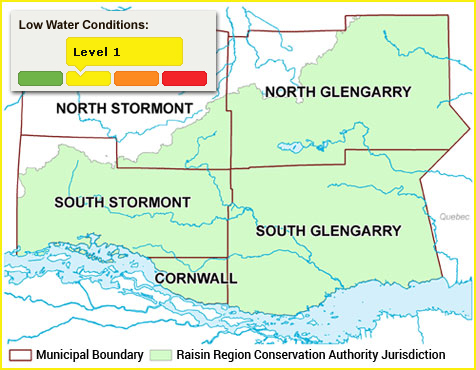 The Raisin Region Conservation Authority (RRCA) is confirming a Level 1 Low Water Condition for our watershed based area.

A Level 1 condition can be declared if 3-month precipitation total falls below 80% of average. As of July 31, the three-month total was approximately 75% throughout the area.

Low precipitation in the summer months can impair groundwater recharge. In the RRCA watershed half of the population relies on a groundwater source (i.e. a well) for their water. A local Water Response Team will convene to discuss water quantity and water quality issues related to the Level 1 drought condition. At this time, it is suggested that residents and businesses in the watershed voluntarily reduce water consumption by 10%. The RRCA recommends the “Conservation Tips” outlined in the Source Water Protection pamphlet: Water Smart.